The meteoric rise of the Wu-Tang Clan was by no means an overnight achievement. While Ghostface Killah, Raekwon, U-God, Inspectah Deck and others were introduced to the world care of late 1993’s Enter The Wu-Tang (36 Chambers) debut by the Wu-Tang Clan, RZA and GZA had careers stemming back into the top of the decade.

Prince Paul was label-mates with RZA (t/k/a Prince Rakeem) at Tommy Boy Records in the early 1990s. Elements of the Stetsasonic member’s drums appeared on video single “Ooh, We Love You Rakeem,”despite an absence in the credits. In a recent conversation with author and journalist Brian Coleman at Trinity College, Paul made some key revelations about his days running with a pre-Loud Records Wu-Tang Clan.

Paul revealed that RZA was hoping to be signed to the Long Island, New Yorker’s short-lived Doo Dew Man Records imprint at Def Jam. At that time, in the early 1990s, Paul and Frukwan had both exited Stetsasonic after lengthy tenures back to the mid-1980s. Outside of Paul’s acclaimed work producing De La Soul, the DJ/producer/artist was exploring other options. 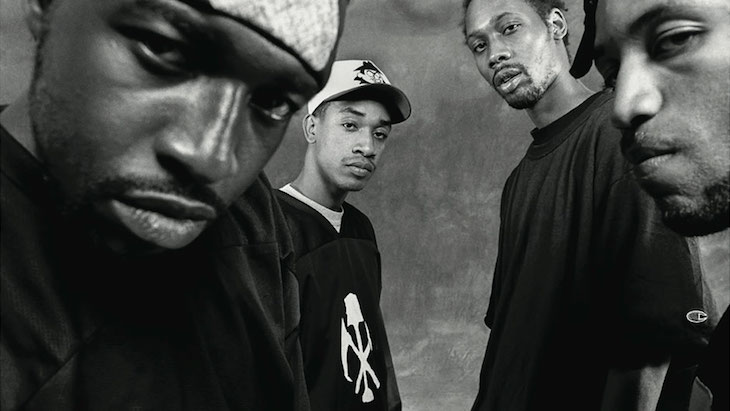 “I was in a dark, depressed mood at the time. My son was about to be born, and everybody hated my guts. ‘I’m gonna show the music world that I’m not done and I’m gonna do it with people who are downtrodden,’” Paul recalls. “I called [RZA, Frukwan, and Poetic] separately and said I had an idea and said to come by my house. They were like, ‘Hey I know you,’ to each other. I sat them down and played them music. And all of the music was just dark. […] They thought it’d be some 3 Feet High and Rising type of stuff or [similar to what I had produced for] 3rd Bass. But it was just dark. And they were trying to think of names. I was like, ‘I don’t care,’ I was angry. And there will always be a debate, but RZA came up with [the name] Gravediggaz. We kind of liked it.” Each artist took on a grave-themed alias. They recorded the demo “The House That Hatred Built,” which Paul shared on his Soundcloud several years ago:

What is especially interesting about Gravediggaz is that while debut album 6 Feet Deep would release nine months following Enter The Wu-Tang, the Gee Street Records release was actually recorded before the platinum nine-member collective’s breakthrough.

“Remember, this is before ‘Protect Ya Neck.’ Wu-Tang was conceived, but hadn’t recorded at that point. This is ’91.” That year, De La Soul Is Dead released, the acclaimed, gold-certified De La Soul sophomore, produced by Paul. “We made the [Gravediggaz] demo, it was flawless, I thought it was the best thing ever. We shopped it, and nobody wanted it.” Paul says that specifically Def Jam and Jive passed on the project.

In revisiting those 1991 recording sessions, Paul explained, “RZA would bring some of the Wu-Tang [Clan] guys when he’d come to my house to record the Gravediggaz demos. I remember [Ol’ Dirty Bastard] and GZA, they’re cousins, they wanted to do a group together and have me produce it. And I was like, ‘Nah, I got this Gravediggaz stuff, maybe when that’s done.’” At the audience, Paul laughed about hindsight. At the time, O.D.B. was an unknown MC, while GZA (as “The Genius”) was a fledgling Cold Chillin’/Warner Bros. Records hopeful, working with Easy Mo Bee. Paul continued, “So then ‘Protect Ya Neck’ came out, RZA put it out himself and it blew up. I’m still shopping Gravediggaz. Having Wu-Tang blow up should have helped, but people still weren’t interested. They thought it was gimmicky and whatever. I gave myself one more week to shop it, and it was the last day of that week. It had been a year or year and a half and I was going to give up.”

Paul revealed that several years after the demo was recorded, circumstances had changed for some of the group. And that’s when John Baker from Gee Street [Records] called and wanted to put it out. Poetic had just got a job at a bagel factory, I remember that. Frukwan was making clothes. Wu-Tang still wasn’t that big. But we got the Gravediggaz deal. It was the greatest thing ever.”

The majority of 6 Feet Deep was produced by Prince Paul, with additional contributions from RZA, R.N.S., and Mr. Sime. The horror-core LP would be a Top 40 debut for the quartet. It would actually reach higher on the charts than Wu’s ’93 debut (#41). However, the first released work would achieve platinum success, and ultimately lead to 20-plus-years of accolades after. One can only speculate how the release order of the two projects affected both groups’ histories.

The quartet would release a full-length follow-up in 1997, The Pick, The Sickle, and The Shovel. Paul and RZA would eventually exit the group for the final Gravediggaz album, 2002’s Nightmare In A-Minor.

Poetic died in 2001 from colon cancer.

Elsewhere in the interview—published at Medium’s Cuepoint, Paul reveals how Handsome Boy Modeling School was signed to Tommy Boy before any material was recorded. He also confirms his son, DJ P For Real is the DJ for Philadelphia, Pennsylvania rapper Lil Uzi Vert.