THE STRANGE AND ENDURING AFTERLIFE OF SPAZZ, POWERVIOLENCE, AND SLAP A HAM RECORDS 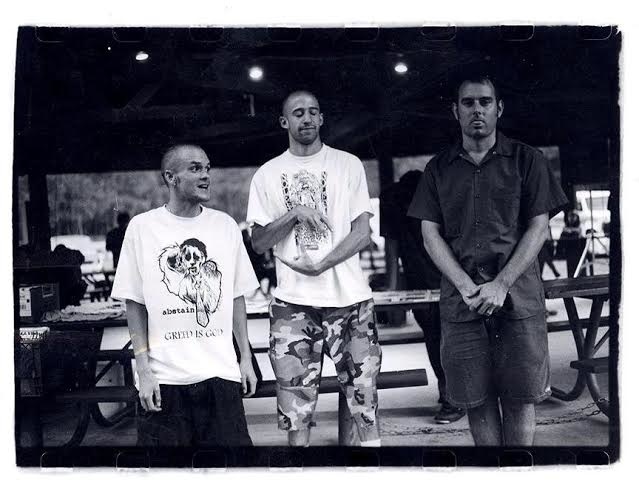 In the post-Internet world of everything available all the time, reissues serve a dual purpose: Make older recordings available on new media, and introduce seminal bands to new audiences. Friday’s re-release of two crucial collections of splits, EPs and comp tracks by Spazz—a Bay Area power violence trio who blasted out nimble metallic hardcore from 1992 to 2000—works on both counts.

Spazz’s nine-year run left a long, winding trail of splits, EPs and comp tracks originally collected by Slap a Ham Records on 1997’s Sweatin’ To The Oldies, collecting 1993-1996, and 2001’s Sweatin’ 3: Skatin’, Satan & Katon, collecting 1995-1998. The Tankcrimes reissues mark the first time these tracks have been available on digital services like iTunes and Spotify.

The extreme music landscape has shifted dramatically since these tracks were first released. During Spazz’s active years, punk and metal played to different audiences, and power violence didn’t neatly land on either side. For reasons more cultural than sonic, Spazz fell to the punks and so confined its performances to venues like Berkeley’s 924 Gilman Street. Twenty years later, the walls between punk, metal and hardcore have collapsed. Heard today, these recordings land like warheads—hardcore distilled to a certain gutbucket essence, backloaded with enough humor and funk that it all goes down like a smooth yet bracing shot of motor oil.

Samples from kung-fu movies, skateboarding videos, hip-hop, television and b-movies serve to break up 40- and 70-second blasts of metallic hardcore that bounce around the skull like a pinball, tagged with song titles perfect for scrawling on a bathroom wall. Of the 131 tracks on the twoSweatin’ collections, only two run more than three minutes. Spazz gives each just enough time to find a groove and swing a bit before moving on.

Noisey spoke with Spazz guitarist Dan “Lactose” Bolleri, bassist and Slap a Ham founder Chris Dodge, and Scotty “Karate” Heath of Tankcrimes about the history of Spazz and why its music still matters.

Noisey: How did Spazz develop its sound? How did you arrive at what made it onto these collections?
Chris Dodge: From the beginning we all agreed we wanted to create something musically punishing, but we also didn’t want to follow the cookie cutter approach of so many hardcore bands. So we started playing with song structures, timing changes, adding “outsider” instruments here and there, adding tons of samples between and sometimes during songs… the intent being that we mix it up enough to add variety, but not too much, so it wouldn’t seem like a gimmick or a joke.

Dan Bolleri: Sweatin’ 1 collects all the early stuff, so you can really hear the progression from the 1st seven-inch, which was completely written by Max and I, to the split with Toast which was recorded after our second album. Playing with Max and Chris really pushed me to play harder and faster than ever before. With the exception of maybe one or two tracks, we released everything that we recorded which means you can trace the progression and hear where we figured it out and where we took it after that.

When you recorded these songs and these splits, did you have any inkling they’d still resonate 20 years later?
Dan: No, not at all. We pretty much got a bunch of offers to do different records, wrote a bunch of material, went in the studio to bang it all out in one session, divided up the tracks and sent them off. Most things came out, some didn’t. Our albums were much more deliberate, but when those eventually went out of print, I figured that was it. I had no idea that people would still be so excited about this stuff. I think the band is more popular now than when it was actually functioning.

Chris: All of our recording was done to fill an immediate need. We were trying to release as many records as possible, just because that’s what we enjoyed. Personally, I always liked writing, recording and releasing new material a lot more than playing live. Holding a copy of new record that I helped write was way more satisfying than playing another show to a ho-hum crowd of jaded Bay Area elitists. I figured down the road there would be some people who remembered us, just because of the scene we were associated with, but I never would have imagined Spazz would have as large of a following as we do now.

Scotty, how did you first find Spazz?
Scotty Heath: When Spazz was an active band, I was in high school cutting my teeth on other bands from the Bay Area like Rancid, Crimpshrine and Operation Ivy back home in a small town called Brighton, Michigan. It was those bands who brought me out to the Bay, and once I got here I realized there was something even cooler going on deeper into the underground. Before I got to San Francisco in 1998, I still viewed punk music as a fan who watched, once I got here the doors opened to participate, to be a part of it not just a spectator.

Spazz is a band that I just get, I instantly could follow the songs. I’m no musician but I knew where it was gonna stop or start or speed up or slow down. Beyond the music  they were openly into hip hop and graffiti (two other things thats brought me to the Bay) and not only didn’t dress punk in patches and leather but openly rejected that they would be defined by fashion.

How did the new reissues come about?
Scotty: While jamming some Spazz on Youtube, I noticed it hadn’t been tagged with link to purchase. That purchase link also means the Youtube video is being monetized, and the rights holder will get their half a penny for every five views or so. I did a quick check at Spotify and iTunes, and there was nothing for Spazz so I emailed Dan that day and inquired about the catalog. After a round of emails with the guys we put the project in motion. The collections have been out of print on CD format for over a decade, so it seemed like a good place to start.

Besides Chris’ Slap a Ham being a huge influence on Tankcrimes, I’ve got to say Max’s 625 Thrashcore had an even bigger impact on me as I got the chance to release a couple records on 625 with my bands. Being part of that catalog and working with Max back then was and remains a big deal for me. Dan has been part of Tankcrimes since the beginning, my third release was a seven-inch for his band Funeral Shock and we did another seven-inch a couple years later. We’re currently working on a new release for Dan’s current band, Deny the Cross (with other guys from Plutocracy, Black Army Jacket and Discordance Axis—very Slap a Ham) due out later this year.

When you listen back to these tracks, what do you hear? Is there a particular emotion that they evoke, or a specific memory that comes up?
Dan: When I was listening back to the new masters, the main thing that struck me was that you can hear how much fun we were having while we were making these records. A lot of that is because we recorded a bulk of our discography with the same engineer (Bart Thurber) in the same studio (House Of Faith) and it was almost like a little reunion when we would have a session. Bart knew how we liked to work and he was just there to capture it and nudge us when we needed it. I’m the only member of the band who still lives in the Bay Area and it has changed so much since we recorded this stuff. When I listen to it I’m taken back to the Epicenter Zone, Valencia Street without valet parking, skateboarding before city funded skateparks, our trippy old jam spot in East Palo Alto, the heyday of San Francisco graffiti, a lot of friends who are no longer with us, etc.

Chris: My favorite part of listening to the Spazz recordings now is how “real” they sound. There’s a certain groove, and a certain loose vibe where you can tell it was just three dudes in a room playing as hard and fast and pissed as possible, and not a bunch of layered “tracking” and overdubs and precision. There’s wrong notes, instruments out of tune, missed vocal cues. But all of that gives it life and keeps it genuine. It actually captures what we really sounded like.

How do you feel Spazz influenced extreme music? Do you have moments where you can hear your fingerprints in other bands?
Dan: I don’t know if we had anything to do with it, but there is definitely less separation between metal, hardcore and punk these days. It was not cool to like metal and hardcore back when we started. If anything we probably helped to introduce some people to old bands they may not have heard of or introduce new bands to people via splits (Charles Bronson) or reintroduce (Hirax)). Once in awhile I’ll hear something and think, “Woah, that kinda sounds like a Spazz part.” But isn’t a “Spazz part” just a mutated Neos part or Infest part or…?

Chris: Spazz was part of a larger scene, so we can’t really take individual credit, but along with our greater group of friends and associated bands we all created a type of music that wasn’t “cool” at that time whatsoever. The perseverance of our scene as a whole was responsible for influencing the newer bands. That said, there are times when I’ll hear a song, and it’s clear there is some Spazz influence: stop and start fastcore with a breakdown, two or three vocalists, and a weird sample at the beginning and end of the track. Nothing wrong with that.

How do you feel about these reissues? Is there anything you’d change?
Dan: Everyone involved in working on the project are people that I’ve hung out with at gigs for years. I’ve played tons of shows and released a few records with Scotty, Mark Reategui did all the layouts for the LP reissues on 625 and Dan Randall has been my go to mastering guy for years. It’s great to finally hear all this stuff mastered by someone who knows what it’s supposed to sound like. The original master for Sweatin’ 3 was terrible so it was great to have an opportunity to finally fix it because I think it collects some of our best stuff.

Chris: I’m glad anyone cares enough to reissue these tracks. There were always things I wanted to change about my playing, the recording, the mix, the sequence. Enough time has passed since I last heard these that I can finally appreciate them objectively for what they are. First-time listeners: Dig the tunes, steal the best parts, then go start something of your own.